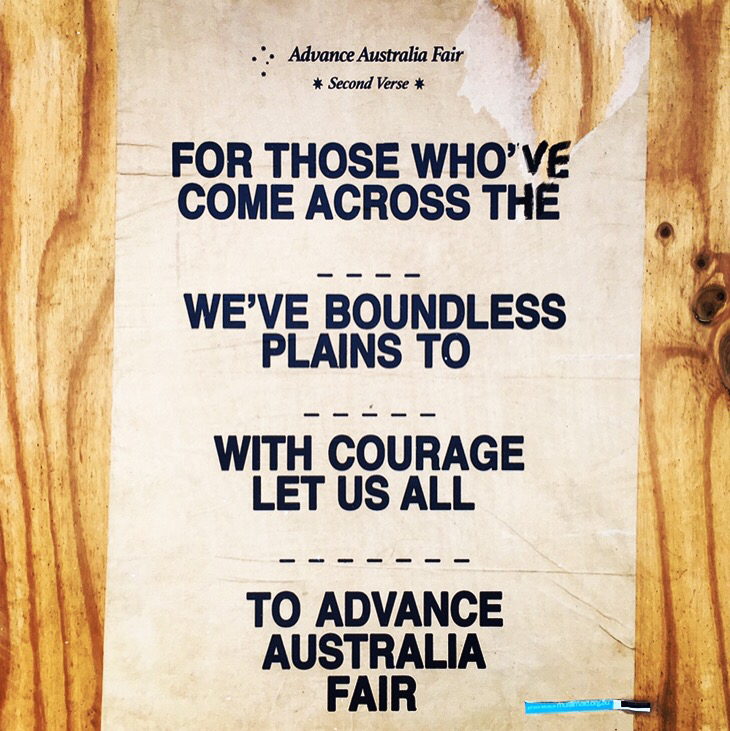 Christmas is on the way which means that the “OMG *they’re* trying to kill Santa/make me say “Happy Holidays”/ ban Christmas lights. And I’m not racist, Or bigoted because it’s clearly true according this clearly fake post. #peoplethataredifferentscareme” posts have started. 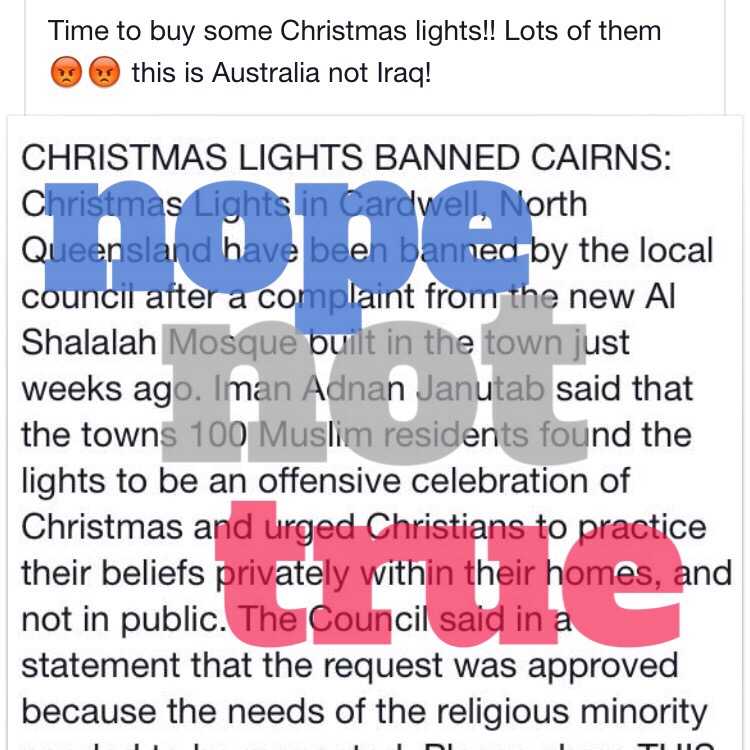 It’s October and already the Iman (whose name I can’t find anywhere online except for in this post) is demanding on behalf of the Al Shalalah (isn’t this a Counting Crows song?) Mosque in Caldwell (which doesn’t exist) that all the Christmas lights be taken down.

Oh but wait. If an uncredited, unofficial FB post isn’t enough to raise some doubt,  a quick Google of the terms “Caldwell+Christmas+Muslim” confirms that it’s bullshit.

Even the poor ol’ PR department at Cassowary Coast Council has to release a statement confirming that Christmas lights aren’t banned (cos you know, made up story).

You would have seen them. They look innocent enough. What’s the harm in sharing something on FB? Scrolling past with a roll of the eyes and a snicker at a friend’s gullibility? 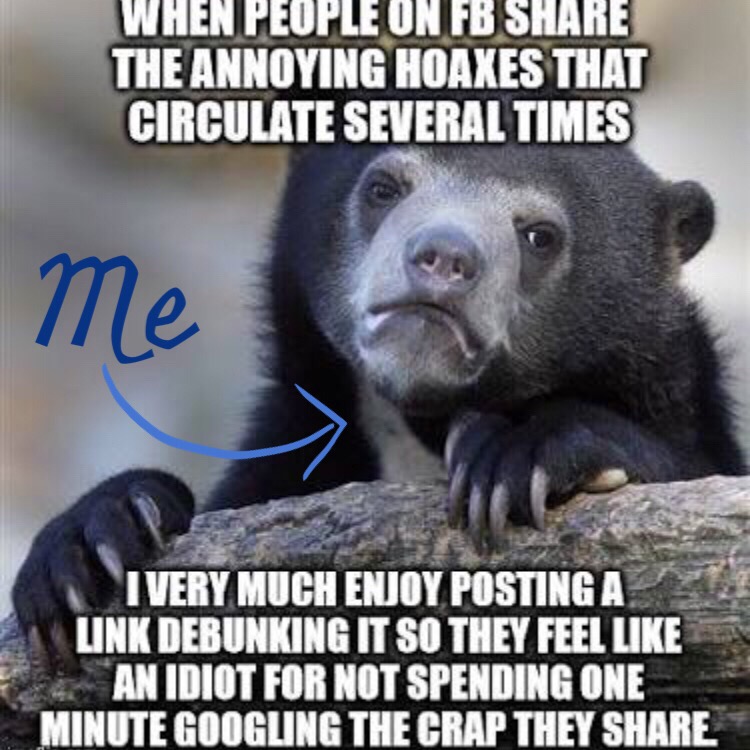 It infuriates me to think of the nasty, weaselling little trolls hunched over their keyboards, that create them with full knowledge that they are untrue, and will be shared.

Posts like these play on people’s fears and perpetuate stereotypes. Stereotypes that feed off what we see in the media and what we hear from politicians. They spread like a plague of casually-racist-herpes. And it’s easy to laugh it off “I can’t believe my friend fell for it!” but I’ve decided it’s time to call them out.
Why? Because these posts strengthen people’s hatred and harden their hearts.

It’s much easier to flick the channel when you see footage of an endless stream of desperate asylum seekers, if you *know* that these are *bad* people, hell bent on “destroying the Australian way of life” or that they aren’t *real refugees* because they are well dressed.

It’s easier to turn your back when you *know* that *they* made your chocolate more expensive, or want to take away your freedom by forcing you into a burqa or cancelling ANZAC Day.

The thing is, none of the people I’ve seen share or post these images are heartless or mean or cruel. They probably shed a tear at the images of Alyan Kurdi. Most of them have shared a beer and a laugh with my Muslim brother-in-law.
And I doubt they’d consider themselves to be racist. They wouldn’t tell an off-colour joke at a neighbour’s BBQ or yell slurs at a stranger. 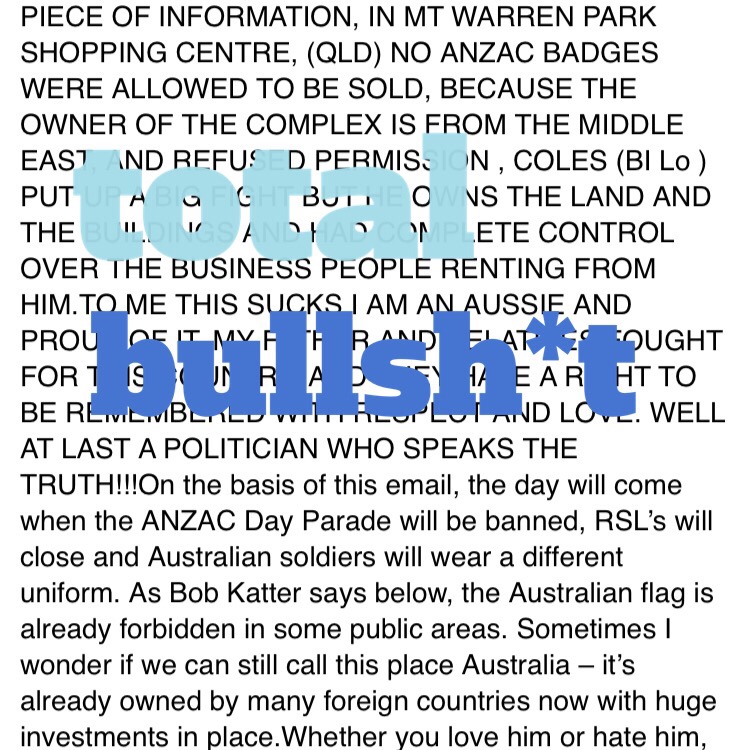 But I think that sharing these posts sanctions and legitimises  those that do do hateful things.  Those that attend rallies. That hurl abuse at people on public transport, or buy bumper stickers that say “Fuck off, we’re full”.

And I’m worried that by ignoring them I am adding to that. 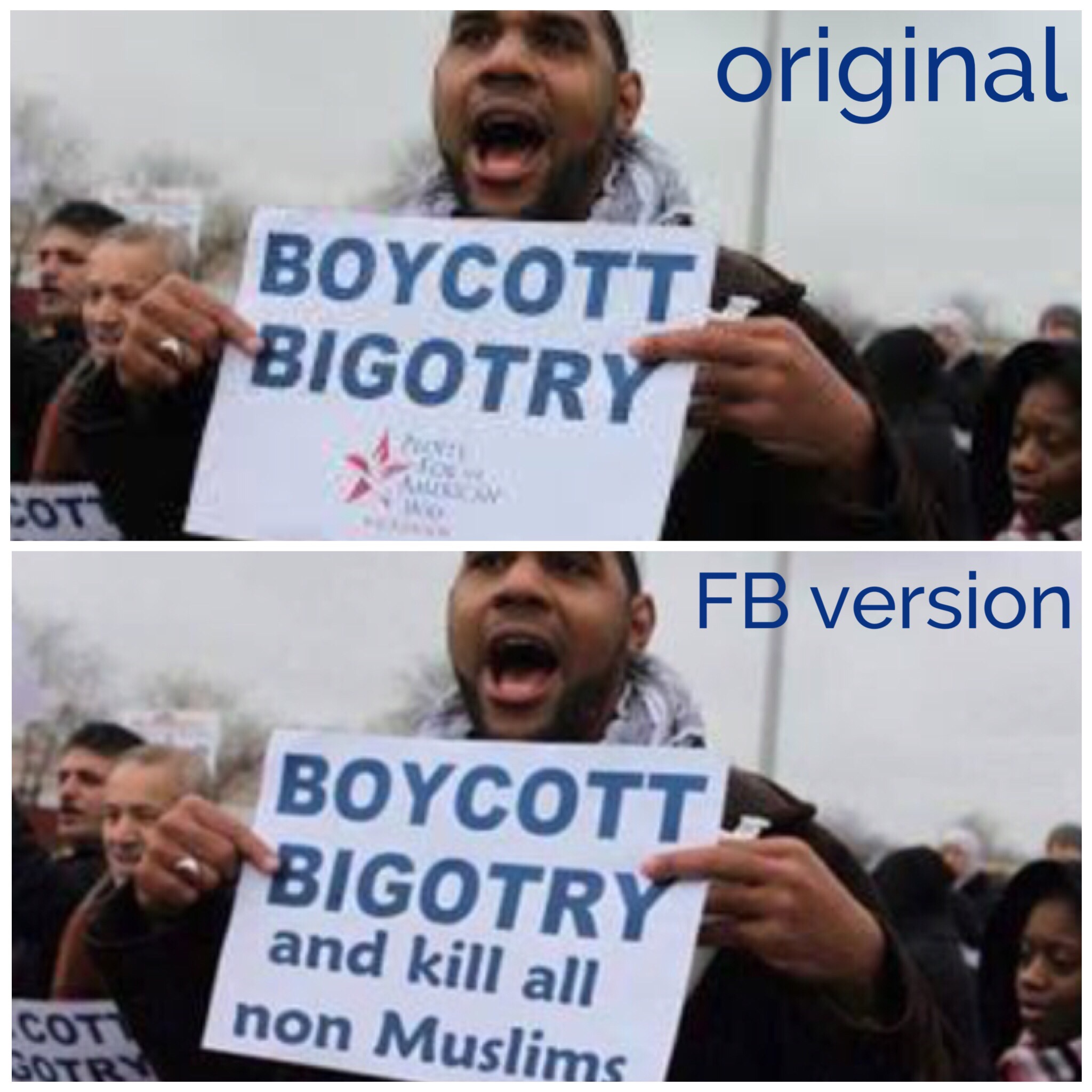 Thursday night I attended a talk about Nauru, Manus Island and the Border Force policy. The speakers included a paediatrician and nurse who spent time on Nauru and an inspirational young asylum seeker.

It was easy to come away feeling helpless. Feeling too small to make a difference. But one of speakers told us to speak out against these stereotypes. To challenge views. I’ve decided that I can use my voice, to call out when I see one of these posts. To call bullshit on it.

My hope is that these insidious messages  can be smashed. That if there are messages of “This isn’t true” or “I disagree because …” then people might think twice about sharing. They might do some research, instead of blindly believing something that’s been posted by Britian First. Or they might share a beer with my sister-in-law and brother-in-law and ask them about seeing asylum seekers in Turkey.

I don’t want to start arguments with people. I’m not aggressive, in fact the thought of confrontation absolutely terrifies me, and usually after I respond to a post I feel sick about checking for replies.

But little by little, these myths, these “reasons” that validate hatred and racism may just disappear from our feeds. The message that “No, actually it’s *not* okay” might get out there and might inspire others to speak up.

And one day I might have a niece or a nephew and they will have a loving Muslim father. They might look different from the other kids at school. They might even be Muslim themselves. I want him or her to live without feeling the spectre of these myths and bigotry.

It’s not a big thing. But it might just make a difference. I have faith that we are smarter (heck, the world is literally at our fingertips) and kinder than that.